Come and visit the Pound Museum this summer! The seasonal reopening of the Pound Store in Oswego, Indiana, happens on Sunday, June 5th from 1 p.m. to 4 p.m 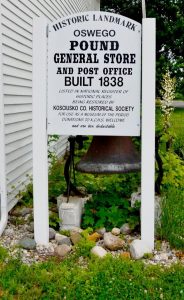 .  The Pound Museum is open on Sundays 1p.m. to 4p.m. June through September.

Kosciusko County was established in 1836.  Two years after that the general store that would eventually be known as the Pound Store, was built in 1838 and is the oldest commercial building in the county.  The building was given to the Kosciusko County Historical Society by the Harold Pound family and has since been placed on the National Register of Historic Places.  The Museum recreates the atmosphere and appearance of the original Pound General Store.  Historically the store would sell baking powder, soda, salt, sugar and school supplies as well as plug tobacco.  It also served as the post office for the community.

Located in Plain Township between State Roads 13 & 15 on Armstrong Road.  It is nestled in the picturesque little village of Oswego, off the busy path.