Step back into history by visiting the Pound Store located in Oswego, this is the oldest commercial building in the county.  In 1968 the building was given to the Kosciusko County Historical Society by Mr. and Mrs. Pound and has since been placed on the National Register of Historic Places.  After extensive renovation, the building has become a historical museum, with the first floor recreating the atmosphere and appearance of the original Pound General Store.

The present town of Oswego and Pound Store Museum are situated on the site of land owned by a Pottawatomie Chief, Musquawbuck, who once owned four square miles of land in Plain Township. This land was granted to him by the Federal Government in 1832.  A Pottawatomie Village was built on this site.  The land was later taken away, but Chief Musquawbuck stayed and raised a family.

History Behind the Pound Store

Oswego was first laid out in 1837 on a tract of land purchased by William Barbee, Rowland Willard and Ezekiel French.  In 1838 the three built the first commercial building, which later became the Pound General Store.  For ten years it was a trading post under the name Willard & Co.  When the gold rush of 1849 swept through the town, it never fully recovered or reached its potential of becoming a town of importance.

In 1889, after teaching school for fifteen years, John F. Pound purchased the general store from Charles White and was appointed the postmaster. The Pounds operated the General Store and post office until 1917. By 1928 the building sported awnings and a front porch.

What did the store sell? Baking powder, soda, salt, sugar and school supplies were sold at the store; plug tobacco instead of bubble gum; Malt-o-vite the only cereal and lard the only shortening, were in stark contrast to the store of today. 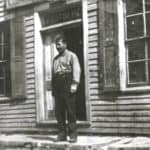 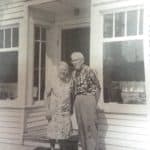 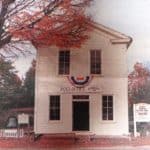 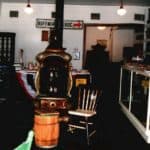 Memberships are available for the Kosciusko County Historical Society. We’d love to invite you to purchase a membership with us and learn about our history!